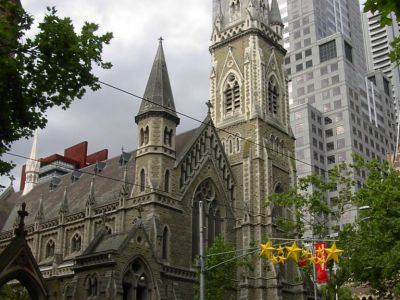 Scot’s Church, located in Collin’s Street in the CBD, was the first Presbyterian Church congregation in Victoria, with services starting in 1836 on the banks of the Yarra River. The congregation grew and applied for a land grant, which was promptly supplied and in 1841 a church to seat 500 was built on the site. But as numbers in the congregation continued to increase, it became apparent in 1869 that a grander building was needed. The foundation stone was laid in 1873 and the decorated Gothic style church was inaugurated on 29th November, 1874.

The church spire was originally 210 feet and was for a very long time the highest point in the city. In 1963 the spire was extensively damaged by lightning and it was lowered by 40 feet. The interior of the church is well known for its use of Tasmanian blackwood timber and stunning stained glass windows featuring the last supper. There is an impressive war memorial mosaic near the entrance to the church that was unveiled in 1961 in the presence of Sir Robert Menzies, former prime minister, and Queen Elizabeth II. World renowned opera singer, Dame Nellie Melba, is said to have begun and ended her singing career in the Scot’s Church choir.
Image by Adam Carr on Wikimedia under Creative Commons License.