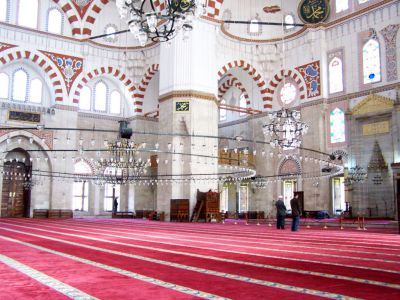 The Şehzade Cammi, or Prince Mosque in Turkish, is an Ottoman Imperial mosque found in the Fatih district of Istanbul. Sultan Suleiman I commissioned the mosque in memory of his son, Prince Mehmet, who died of small pox at the age of 21; hence the name.

The building was completed in 1548, and was the first major project of the imperial architect Mimar Sinan. It is also largely regarded by historians as the first masterpiece of Ottoman architecture created by Mimar Sinan, who went on to create many more mosques and monuments throughout the empire after that.

Other than the mosque, the Sehzade complex contains two madrassah (Islamic schools), kitchens that used to serve food to the poor, and a caravansary. The tomb of the prince himself is also located within the compound. The mosque and its courtyard are separated from the rest of the complex by a wall. The courtyard is bordered by 5 bays domed on each side. Adorning the place are white and pink marble arches. In the center of the courtyard there is an ablution fountain, a later donation by Sultan Murat IV. As to the mosque’s interior, it is rather simple and does not have any galleries.
Image by Darwinek on Wikimedia under Creative Commons License.