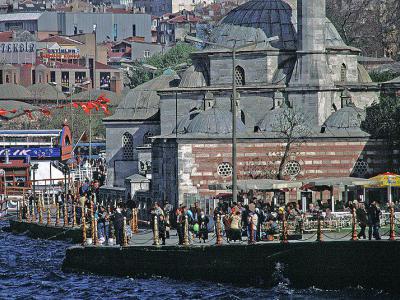 Built in 1580 by famous Imperial Architect, Mimar Sinan, the single-domed Şemsi Pasha Mosque is a masterpiece of Ottoman design. Although rather small in size compared to other of Sinan's creations, it is one of the most attractive constructions in the city, its scenic waterfront setting making it a popular spot for visitors. For those who love architecture, the transition between seashore, pier, and the qibla wall is seamless and fantastic.

The tomb of the Grand Vizier for whom the mosque was constructed, Şemsi Pasha, is located on the grounds, in a private cemetery adjacent to a pretty garden. Furthermore, the precinct is enclosed by an L-shaped madrasa where people come to study and research, and a seawall with grill-windows to the north, giving the impression that one is in a picture gallery looking at framed Bosphorus seascapes.

Interestingly enough, Şemsi Pasha specifically asked for a place where birds will not fly, and consequently the mosque – located at the intersection of winds coming from the north and south – has earned a reputation of being "bird-free". Due to the shape of the minaret, it is also known as "the Asparagus Mosque" among locals.

Open 24 hours a day, except during prayer times.
Image by Dosseman on Wikimedia under Creative Commons License.