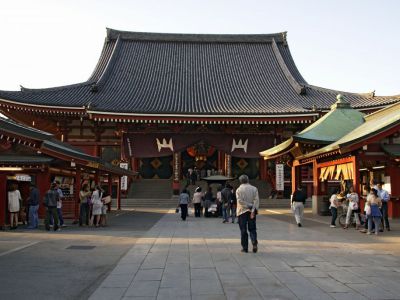 The Senso-ji Temple, also known as the Asakusa Kannon temple, is the oldest and most popular among Buddhist temples in Tokyo. It is the most visited temple by tourists in Tokyo and is famous for the many colorful and vibrant festivals and events that take place all through the year.

According to legend, two fishermen Hinokuma Hamanari and his brother Takenari drew a golden statue of the Bodhisattva Kannon, the Goddess of mercy from the River Sumida. They tried putting it back into the river but it resurfaced time and again. The village headman of Asakusa heard their story and understood the significance of the idol. He became a Buddhist monk and converted his home into a temple which is now the well known Senso-ji temple. The Tokugawa Shoguns were devotees of the temple and expanded the structure and gave it the reverential importance it enjoys today. It was burned down in the World War II bombings and was rebuilt by worshippers. The golden statue of Kannon is still housed within the temple but is never shown to the public.

Over 30 million visitors and pilgrims visit the temple annually and it is the venue for important festivals. The Sanja Matsuri, the largest festival of the Asakusa Shrine is celebrated every year in May and the Asakusa Samba Carnival takes place annually in August.

Why You Should Visit:
Although very crowded during the most of the day, this is still a very nice place for a foreigner.
Great for taking lots of pictures, getting your fortune, buying some good luck charms and other gifts for friends & family, or just having some yummy food.

Tip:
There are tons of picture opportunities around the shrine grounds especially during festivals and other events.
Walk down the side streets and you'll find many of the better food stalls and restaurants and far fewer people.
At sundown, the crowds are thinner and more importantly, the main temple buildings are beautifully lit!