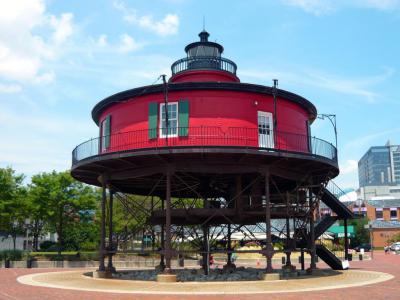 The Seven Foot Knoll Light was built in 1855 and is the oldest screw-pile lighthouse in Maryland. It was initially installed on a shallow shoal, Seven Foot Knoll, at the mouth of the Patapsco River.

Constructed of 1-inch (25 mm) rolled iron, the lighthouse consists of three main sections. The gallery deck was located 9 feet (2.7 m) above the average high tide waters. The house was the second section, sitting directly atop the gallery deck. This is where the keeper and his family would live. Atop the housing area was the third section of the lighthouse, the light beacon. A 4th order Fresnel lens was housed in the small light compartment. It was visible for 12 miles (19 km).

In 1997 the lighthouse was transferred to the Baltimore Maritime Museum where it is located today. It was placed on the National Register of Historic Places on August 22, 1989. The lighthouse is a contributing element in the Baltimore National Heritage Area.
Image by Rob Shenk on Flickr under Creative Commons License.
Sight description based on wikipedia