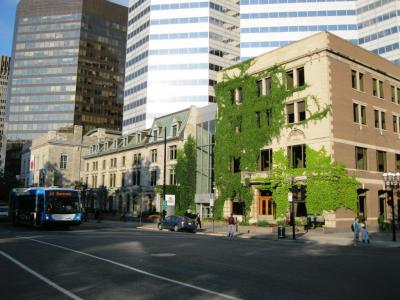 By the end of the 19th century, the wealthy class had begun to move north of Vieux-Montréal, building mansions and townhouses along Sherbrooke St. and leading to the development of the legendary "Golden Square Mile" neighbourhood. Many impressive buildings from this heyday remain, including the imposing Beaux-Arts-style Masonic Memorial Temple as well as several historic properties incorporated into Maison Alcan, the world headquarters for mining company Alcan.

From the early 20th century to the 1930s, Sherbrooke was the most prestigious street in Montréal; a sort of equivalent to NYC's Broadway. Along with the Museum of Fine Arts, established in 1912, you'll find other key attractions such as the beloved mid-size McCord Museum, the venerable Ritz-Carlton, the Grand Séminaire, Parc Lafontaine, and further east, the Château Dufresne, Olympic Stadium, Montreal Botanical Garden and the Montreal Biodome.

Three of Montreal's four major universities are on Sherbrooke St., sharing space with many luxury hotels, luxury shops and great restaurants. Good place to explore Montreal Underground if it rains, too!
Image by Jeangagnon on Wikimedia under Creative Commons License.