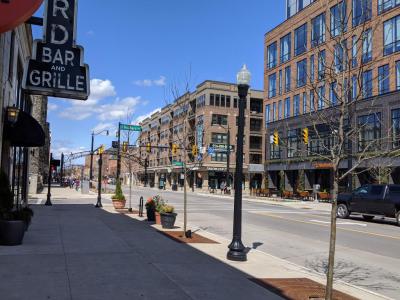 Head north from downtown Columbus to explore the artsy neighborhood of Short North. This area is centered on High Street between Victorian Village and Italian Village. It extends from downtown all the way to Ohio State University.

The artistic influences of the neighborhood have their roots in the 1980s. The Short North Business Association started monthly art shows that quickly grew into regular events. Galleries soon developed and the district became the center of arts in the city.

Those visiting Short North Arts District will see more than a dozen unique galleries. There are also a number of shops and eateries in the district. Those who want to return to the area at the end of their walking tour can take in a live performance at one of the many clubs and bars.

Public art is a mainstay of the district. Tourists are encouraged to take photos of the many works of art on the Short North Art Trail and share them widely. Visitors will see permanent pieces like "Are You A Life-force?" by Sally Meier and Joe Kavalec, a mural that celebrates a prominent local band. Other permanent art displays include an obelisk titled "In Dreams Again" by Andrew Lidgus, a suspended sculpture called "Jubilation" by Stephen Canneto and Judith Spater and "Mona Lisa Mural" by Brian Clemons.

Temporary murals are considered part of the annual mural series. These highly detailed and beautifully crafted murals are placed in the Short North Arts District each summer. Unlike many of the pieces in the galleries, murals do not primarily come from local artists. Visitors may see works from all over the globe represented on these temporary displays.

Why You Should Visit
- To visit one or more of the many art galleries
- To enjoy free, public art

Tips
Don't rush! The Short North Arts District is part of Columbus that should be savored. Plan a few hours at minimum to explore all that this neighborhood has to offer.
Image Courtesy of Wikimedia and Ɱ.