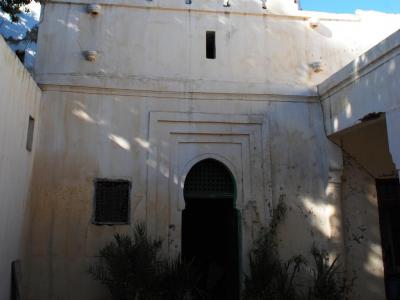 In the 14th century a Muslim saint, Sidi All el-Kairouani, embarked on a voyage from the town of Kairouan in Tunisia. He was going to Senegal. Why he was going to Senegal is not known, for his ship foundered off the coast of Morocco and he was thrown into the sea. As fate would have it, he was rescued by fishermen who became his disciples.

In time, it is believed, he sent for his daughter, her name was Lalla Baida. She too embarked from Kairouan and her ship also foundered but she did not survive. He asked his followers to bury her by the shore. He told them that when he died, he wished to be buried beside her. Their tomb and shrine is behind the sqala in old city.

The shrine was restored properly by Sultan Sidi Mohamed Ben Abdallah in the 18th century. To this day fishermen pray to him as their patron saint. Some say Casablanca got its name from the white walls of the tomb seen from the sea. But who knows if this is true?
Image Courtesy of Wikimedia and Rais67.