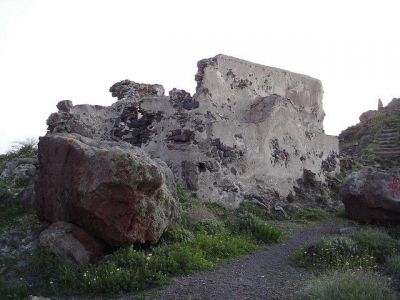 Located in Imerovigli Village, the Skaros Castle Ruins is one of five fortified settlements on the island. This ancient and fascinating site was originally known as Epano Kastro and also as La Roka. It was built by the Venetian, Giacomo Barozzi, in the 1200s and was the capital of the town until the eighteenth century. The castle was also used as an observation tower and featured a bell, at the top of the mountain, to warn townspeople of approaching pirates. It was and still is known as the symbol of Santorini.

Once a populous area, damage from earthquakes in 1650, 1701, 1866, and 1870 caused all of the townspeople to move elsewhere and turned the once glorious castle into rubble. The area is completely uninhabited, except for the Church of Agios Ioannis Apokefalistheis.

Hikers will enjoy the walking trail that starts at the church Agios, makes it way through the cape that connects Skaros with Imerovigli, and ends at the small chapel of Theoskepasti. The island is decorated with miles of beautiful remnants of lava and gorgeous landscape. If you are fortunate enough to reach the summit of Skaros, you will enjoy breathtaking views of the island and the crystal-clear Aegean Sea.
Image Courtesy of Flickr and Klearchos Kapoutsis.

Want to visit this sight? Check out these Self-Guided Walking Tours in Santorini. Alternatively, you can download the mobile app "GPSmyCity: Walks in 1K+ Cities" from iTunes App Store or Google Play. The app turns your mobile device to a personal tour guide and it works offline, so no data plan is needed when traveling abroad.