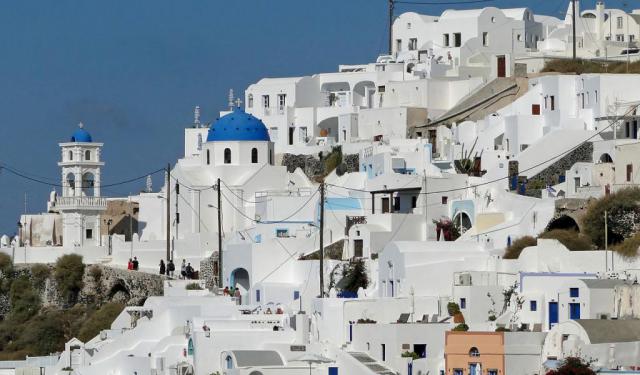 The quaint village of Firostefani, whose name translates as "The Crown of Fira", is now considered a suburb of Santorini's capital, with no clear boundary between the two, smoothly flowing into one another. The high vantage point of the cliffs here affords visitors an insanely beautiful perspective of the sea, volcano, and other stunning surroundings; the local sunsets are particularly not to be missed. For those who wish to get a quick bite to eat, Firostefani's small central square offers a nice variety of cafes and restaurants with a great selection of wines and other beverages, not to mention delicious cuisine.

As for Imerovigli, this now upscale area was entirely destroyed by an earthquake in 1956, but thanks to the careful restoration since 1970 it has managed to preserve its traditional style and charm. Perched on a clifftop overlooking Santorini’s caldera islands, this is the highest point of the island. Consisting of narrow lanes, which are almost silent compared to the streets of Fira, Imerovigli is ideal for evening strolls.

Still, it becomes rather vivid during the day and is not short of memorable attractions. Among them are the ruined 13th-century Skaros Venetian Fortress near the landmark summit of Skaros Rock and the blue-domed Panagia Theoskepasti church on the rock’s flank. Also worth visiting is Panagia Malteza Chapel with the icon of Panagia Malteza (Our Lady from Malta), reportedly found near Malta, and an impressive chancel screen made of wood.

For a more detailed acquaintance with the picturesque treasures of Firostefani and Imerovigli, take this self-guided walking tour.
Image Courtesy of Wikimedia and Berard Gagnon.
How it works: Download the app "GPSmyCity: Walks in 1K+ Cities" from iTunes App Store or Google Play to your mobile phone or tablet. The app turns your mobile device into a personal tour guide and its built-in GPS navigation functions guide you from one tour stop to next. The app works offline, so no data plan is needed when traveling abroad.

Firostefani's "main square" is nothing like a real town square, but just a small area in the quaint neighborhood right next to the main road. For those who wish to get a quick bite to eat, it offers a nice variety of eateries. In most cases, the local cafés and restaurants carry a great selection of wines and other beverages, not to mention the delicious local cuisine.

Also, Firostefani Square is situated near the Old Port of Fira, and close to Skala, which makes it an ideal vantage point for a breathtaking view of the caldera cliff side.

Located in the stunning and blue waters of the Aegean Sea is the Agios Nikolaos Monastery. This female convent is located between the villages of Firostefani and Imerovogli in Santorini. It is dedicated to saints Agios Panteleimon, Agios Nikolaos, and Zoodochos Pigi, and was established by the Gizi family in 1651. Prior to its current use, it was a private family chapel.

The design of the nunnery reflects the clean and simple lines of Cycladic style, while the interior of the edifice features beautiful 17th century artwork and spectacular golden icons. Two museums, folklore and ecclesiastical, are also located on the property.

Each year on August 15th, locals come here to celebrate the religious festival the Feast of the Assumption of the Virgin Mary. After church services, locals and visitors celebrate the holiday with food, song, and dance. Visitors will enjoy viewing the handmade textiles that the nuns make, using hand looms.

The Church of Panagia Malteza was originally built in the 19th century. Theodoros Borlis, a ship's captain, found an icon of the Virgin Mary floating in the sea near Malta. He brought the icon back to Santorini and built a church to honor the icon of Panagia Malteza.

The church is built on the cliff's edge and provides a beautiful view. It is open to the public, and visitors are welcome to enjoy the beautiful and serene setting. The Church of Panagia Malteza is a popular location for weddings.

Paths from the church lead visitors to the imposing Skaros Rock, the Caldera walkway, and the Chapel of Panagia Theoskepasti.
Image Courtesy of Wikimedia and Κλέαρχος Π. Καπούτσης.
4

Located in Imerovigli Village, the Skaros Castle Ruins is one of five fortified settlements on the island. This ancient and fascinating site was originally known as Epano Kastro and also as La Roka. It was built by the Venetian, Giacomo Barozzi, in the 1200s and was the capital of the town until the eighteenth century. The castle was also used as an observation tower and featured a bell, at the top of the mountain, to warn townspeople of approaching pirates. It was and still is known as the symbol of Santorini.

Once a populous area, damage from earthquakes in 1650, 1701, 1866, and 1870 caused all of the townspeople to move elsewhere and turned the once glorious castle into rubble. The area is completely uninhabited, except for the Church of Agios Ioannis Apokefalistheis.

Hikers will enjoy the walking trail that starts at the church Agios, makes it way through the cape that connects Skaros with Imerovigli, and ends at the small chapel of Theoskepasti. The island is decorated with miles of beautiful remnants of lava and gorgeous landscape. If you are fortunate enough to reach the summit of Skaros, you will enjoy breathtaking views of the island and the crystal-clear Aegean Sea.
Image Courtesy of Flickr and Klearchos Kapoutsis.
5

One of Santorini's symbols, the Chapel of Panagia Theoskepasti, is located near the port of Andres, on Skaros Rock, a rocky peninsula that projects into the sea. It was fashioned by multiple volcanoes that changed the shape of the island from circular to crescent. In addition, many other islands were also formed from these volcanoes. The rock was also the site of a castle until an earthquake destroyed the building in the 19th century.

The white building with a blue dome housing the church is open during the day until 4pm, free for anyone to visit. Moreover, the village of Imerovigli has some of the best views of Santorini because of its high vantage point. Visitors can reach the church via the nearby walking trail that begins at Imerovigli and runs through the cape that connects Skaros to the village. The trail ends at the Chapel of Theoskepasti. There is also a stunning underwater caldera that is worth the wait. Once you have visited the church, make sure to see the Hidden Room. The cave sits to the right of the trail and is one of the few elements that remain from the original castle structure.

Tip:
Weekend morning chanting begins at 7am and is broadcasted via loudspeakers to the entire district for hours.
Image Courtesy of Wikimedia and Κλέαρχος Π. Καπούτσης..