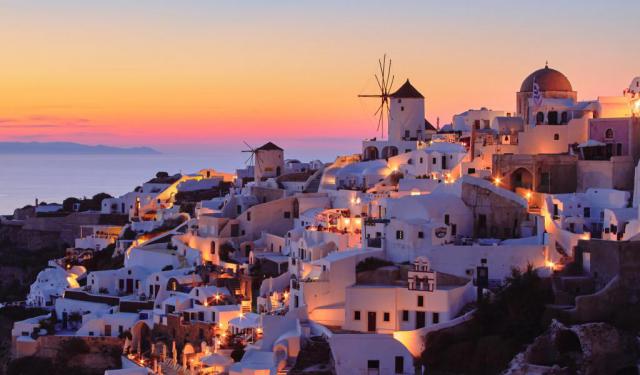 The main attraction of Santorini island, Oia is a scenic coastal town hanging on the northwestern tip of the rugged clifftop overlooking the Aegean Sea. The idyllic setting of narrow alleyways and white-washed, blue-domed churches is complemented by charming, traditional Cycladic houses built on the lip of the caldera (volcanic crater filled with water) as well as cave homes in the niches carved directly into the rock face of the steep seaward slope.

Oia was previously known as Apäno Meria ("upper side"), a name which still occurs locally as Pano Meria. The town reached its peak of prosperity in the late 19th-early 20th centuries, thanks to the merchant fleet which plied trade in the Eastern Mediterranean. The two-story neo-classical mansions, built in the highest part of the town, in succession one above the other, by wealthy ship captains, remind of the days of the former affluence.

The domed roofs are meant to allow the falling rainwater to run down and be collected. As for the choice of white and blue colors, under the Ottoman rule of Greece, which lasted over 400 years, the Greeks were not allowed to fly their national flag. In defiance, in Oia they painted the whole town white and blue, thus giving it a distinctive national vibe and rather elegant look.

Part of Oia was destroyed in 1956 by an earthquake. In 1976 the town was included in the program for preservation and development of traditional settlements of the Greek National Tourism Organization, owing to which much of its historic heritage has been preserved.

One of the restored 19th-century mansions is now converted into the Naval Maritime Museum. The Amoudi Bay, lying below the town, is a natural attraction in its own right. At the pinnacle point of Oia is the ruined castle which serves as a lookout with a complete 360-degree view.

One of the most recognizable local buildings is an old windmill, which often appears on postcards. Oia also has numerous restored churches, including perhaps the most notable of them – Panagia church.

To find your way around this amazing town and to explore its attractions at your own pace, take this self-guided walking tour and enjoy yourself!
Image Courtesy of Flickr and Pedro Szekely.
How it works: Download the app "GPSmyCity: Walks in 1K+ Cities" from iTunes App Store or Google Play to your mobile phone or tablet. The app turns your mobile device into a personal tour guide and its built-in GPS navigation functions guide you from one tour stop to next. The app works offline, so no data plan is needed when traveling abroad.

Located in the northwestern part of Santorini, at the foot of the village of Oia, Amoudi Bay is a picturesque inlet that is popular with tourists and locals. The crystal-clear blue waters of the sea make this a perfect spot to fish, boat, or to take a swim. It is a frequent stopping-point for vessels, making a journey to the nearby Thirasia or the Efta Paides Church.

The location is accessible by mule or by hiking down the 200 plus steps from the village of Oia. Visitors will enjoy the beautiful Mediterranean sunrise and sunset. In addition, the many boats will remind you of simpler times from long ago.

A quaint hotel, a few cafés, a mini market, and a small number of fish taverns are some of the comforts visitors will enjoy. In addition, the fish that the taverns serve is possibly the freshest and best tasting produce in all of Greece. The beach is quite popular with tourists. If you wish to avoid the crowds, it is best to swim early in the morning or late in the afternoon. Locals say, the rocks behind the lighthouse are the best swimming spot on the beach.

The bay is a well known site on the island, and is often cited as an excellent location for viewing the sunset. The bay is also known for the 200 steps leading from the base of the feature to the town of Oia on the cliffs above. Due to its convenient location, the base of the bay's cliffs is dotted with buildings belonging to the village of Ormos Armeni, and many sailing tours use Amoudi as their staging point.

Image Courtesy of Wikimedia and Sidvics.
2

The Windmill of Oia is one of Oia's most iconic photography spots. This picture-perfect windmill is also available as a unique villa rental. If you want to capture the best sunset-watching spot and make memories to last a lifetime, look into renting the Windmill of Oia.

The Windmill of Oia features two bedrooms, a bathroom, and a small kitchen. A winding stone staircase takes guests to each room in the windmill villa. An enormous deck provides breathtaking views and a great spot to relax and watch the world go by.

Santorini is a windy island and is home to about 70 historic windmills. The original windmills might have been built as early as the 14th century. Traditional Santorini windmills were used to grind flour and housed bakeries as well. Most of the windmills you see today were built during the 17th century or later.
Image Courtesy of Flickr and Irene Grassi.
3

This ancient castle dates back to the late 15th century. The castle's ruins remain one of Oia's most visited attractions and are a popular spot to watch the sunset from.

Oia Castle was built to protect the island and its residents against pirates. Pirates would steal property, kidnap men and women, and sell the kidnapped people at slave markets.

Because of the constant threat, residents built their houses close together in hard-to-reach cliffs. Then, when residents saw pirates approaching, they fled to the castle and hid their valuables in pits under the castle.

The castle's high location made it an excellent lookout station. Venetian rules had residences in the middle of the castle. Its defensive structure made it hard to conquer, but Turkish invaders did succeed in capturing the castle in 1577.

A 1956 earthquake heavily damaged the castle, and most structures fell into the sea. The castle's tower and wall fragments are all that remain. From the castle's ruins, visitors can enjoy beautiful views of the Santorini islands, the volcanic islands of Nea Kameni, Palea Kameni. Visitors can also see Thira and Thirassia from this vantage point.

Today, tourists and locals come to the castle to watch the sunset each night. If you want to participate in this special nightly celebration, come early and grab your spot.
Image Courtesy of Flickr and Alma Ayon.
4

The Naval Maritime Museum is located in a historic 19th-century two-story mansion that originally served as a captain's house.

In the 19th century and early 20th century, Santorini owned large vessels that traveled from Russia to the Mediterranean. Santorini exported wine and pumice stones and imported cereal, tomatoes, timber, furniture, and fabrics.

In addition, the museum features ship models, uniforms, and local captains' portraits. Rare figureheads are also on display. The museum has an extensive collection of paintings that depict old sailing vessels. Rare photographs show visitors what life was like during the booming shipping age.

The Church of Panagia Platsani was originally constructed inside the walls of the Castle of Oia. The church was moved to its current location, the village center, and was rebuilt on higher and more stable ground following the earthquake of 1956. The place of worship is dedicated to the Akathist Hymn of the Most Holy Theotokos. The building is white-washed and features a blue-dome and arched windows.

The place of worship came into existence when the townspeople decided to build the cathedral at its previous location to honor the icon of the Virgin Mary that was found in the sea by a fisherman. After much struggle, the fisherman, along with the priest and fellow parishioners brought the icon to the church.

The icon was moved the following day, by phenomenon, from the church to the castle. Each time, the citizens returned the symbol to the church, it allegedly moved back to the castle miraculously. It was then that the townspeople decided to build a place of worship where the Virgin Mary had placed the icon. Today, the Virgin Mary overlooks the sea where her spirit can bless all vessels and its passengers. The church contains many tributes to sailors and other residents of the town.

Tip:
You can either walk up the steps, take a donkey ride or the cable car. Walking takes about 35-40mins. The cost for the cable car is €5 one way.
Try visiting during the Greek Easter when lanterns are placed all around town, including around churches and various buildings.
Image Courtesy of Flickr and Rambling Traveler.