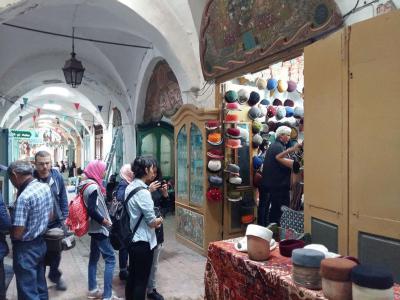 Among various souks in the Medina of Tunis, the Ech-Chaouachine specialized in the trading of chachia – a boiled wool colored men's head-wear, with blue or black glans to make it more luxurious. Chachia production requires more than two months which includes several steps from crochet all the way to finishing; only the dying and the finishing production steps are executed at the souk.

According to the chronicler Al Wazir Al Sarraj, Mohamed Bey El Mouradi ordered the construction of the souk in 1691-1692, following the great push that Moorish migrant artisans gave to chachia production and trading at the beginning of the 17th century. The chachia artisans, called chaouachis, were mainly of Andalusian origins and initiated from the start one of the most important artisan guilds in the country. Their profit generating business was practiced exclusively in Tunis and followed an important production process and artisan hierarchy, headed by an amine, as with all other traditional crafts.

At the chachia workshops situated within Souk Ech-Chaouachine, artisans and apprentices sit on wooden benches leaning on workshop walls, the master artisans sitting behind a counter to meet customers.
Image by Touzrimounir on Wikimedia under Creative Commons License.