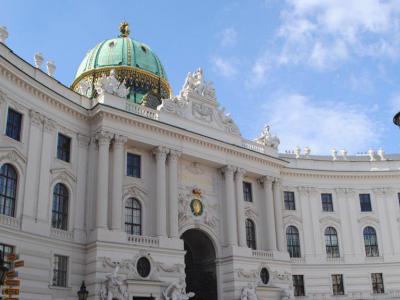 The Spanish Riding School (Spanische Reitschule) of Vienna is famous all over the world as the only place to have preserved and practiced classic equestrian skills for over 450 years. While the exact origins of the school are obscure, it is believed to have been founded by the Habsburgs in 1572 to cultivate haute école horsemanship by way of breeding and training horses from Spain, hence the name. The original location of the school – the former residence of the Emperor Maximilian – dates back to 1729 and has not changed much since.

Among other things, this school is particularly famous for its Lipizzaner horses. These noble creatures are perhaps the only horses in the world to live in an emperor’s palace. As a formal dressage school, the Reitschule provides instruction in the military tactics that the Lipizzaners have been famous for since the time of Napoleon, and whose performances are a timeless delight for visitors to this day.

The school offers regular 70-90-minute public demonstrations in the opulent Winter Riding School, commissioned in 1729 by Emperor Karl VI. Ranging across three levels of complexity and formality, these performances of outstanding horsemanship are accompanied by music, and have not changed a bit for decades, still thrilling the crowds. The stallions performing athletic feats on the sawdust of the school arena take their name from the stud farm at Lipizza near Trieste in Slovenia, founded by Archduke Karl in 1580. Originally, they were produced by crossing Arab, Berber and Spanish horses renowned for their grace and stamina. The horses begin learning the complex sequences of steps at the age of three.

The gracious interior of the school is lined with 46 columns and adorned with elaborate plasterwork, chandeliers and a coffered ceiling. At the head of the arena is the royal box along with the galleries for spectators. Riders entering the arena traditionally doff their hats to the portrait of Karl VI as a token of respect. The equestrian statue of another emperor, Josef II, adorns the school courtyard.

Why You Should Visit:
If you're a horse lover, watching these incredible creatures is a must when in Vienna. But even you are not fond of horse shows, a guided tour (English/German) through the stabling and the riding arena with background information & details about the complex history and breeding system is worth a visit anytime.

Tip:
If you like horses, it is great to see them train in the morning.
If you want to see them jump, go for the actual show. Make sure to book tickets online in advance to skip the long queues.
If you drop into the (not too expensive) on-site cafe for a coffee, drink or snack, you can go out to the terrace, adjacent to which is a wooden enclosure where you can see the horses and their riders practice before the show - and that actually won't cost you anything.