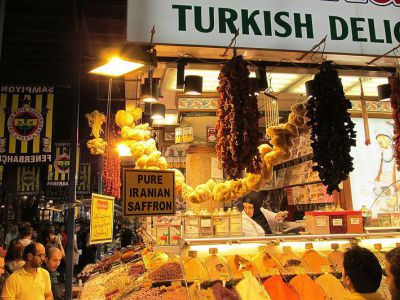 No visit to Istanbul is complete without stopping by the atmospheric Spice Bazaar, one of the largest and most famous bazaars in Istanbul, located near the Galata Bridge in the Eminönü quarter of the Fatih district. While the Grand Bazaar may be the largest and most popular covered shopping complex in the city, this spice market is by far the most colorful, fragrant, and often the most fun.

Built in 1664, as part of the Yeni Camii (New Mosque) complex, it is known locally as Mısır Çarşısı, which is sometimes translated to either "Egyptian Bazaar" or 'Corn Market' (as mısır in Turkish means both “Egypt” and “corn”). There are several documents, however, suggesting that initially the place was called "New Bazaar" and eventually got the name "Egyptian" because its construction was subsidized with proceeds from the Ottoman eyalet of Egypt in 1660. As part of the New Mosque, the revenues obtained from the shop rentals within the bazaar were used for the mosque upkeep.

Traditionally, this place has been the center of spice trade in Istanbul, although in recent years it has seen more and more shops of other type move in. Currently, the bazaar has a total of 85 shops under its roof selling spices, Turkish delight and other sweets, dried fruits and nuts, tea, Turkish coffee, pottery, jewelry, and souvenirs. Overall, the market is a wonderful place to stroll and enjoy the sights, smells and, of course, tastes. Of course, as in all tourist destinations, the discussion of price here is essential, so haggling is welcome.