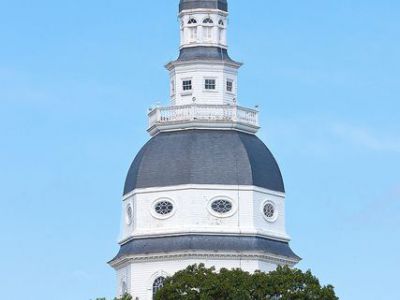 St. Anne's Episcopal Church is a historic Episcopal temple located in Church Circle. The first house of worship in Annapolis, it was founded in 1692 to serve the newly formed Middle Neck Parish, one of the original 30 Anglican parishes in the Province of Maryland.

Since St. Anne's was often referred to by writers of the time as a "barn" rather than a "proper place of worship", many locals asked the government for a new church to be built. Their wish was granted and, in late 1775, the old church was razed. Finally, in 1792, the new St. Anne's church was completed; it was much larger and more structurally secure than its predecessor.

However, on February 14, 1858, a furnace fire practically destroyed the interior of the building. Most of the original documents from the old church burned, and a new church building was requested. The third and final church was erected in 1858. It was designed in a Romanesque Revival style and incorporated a portion of the old tower. Most of the church was built in that year, apart from the steeple, which was finished in 1866 due to the Civil War. This is St. Anne's current church building.

Opening hours: Monday – Thursday: 8 am - 4 pm; Friday: 8 am - 12 pm
Image Courtesy of Flickr and mikeporterinmd.
Sight description based on Wikipedia.