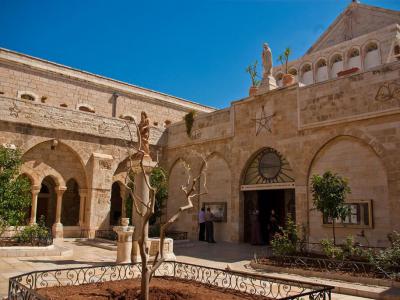 St Catherine’s is a parish church within the Church of the Nativity compound in Bethlehem, and practically shares a wall with the Nativity Church. This chapel was built in 1882 as part of a Franciscan monastery, thanks to the funding provided by Austrian Emperor, thus expanding the previous St Catherine shrine that stood on this site since 1347. Both, the new church and the Franciscan monastery reveal architectural elements from different historic periods, namely: the 12th century Crusader Church and Charter House, as well as the 5th century Sanctuary of St Jerome once located here. In 1948, the church, and specifically its cloister, were redesigned and, in 2013, were expanded further to accommodate more worshipers.

The church is named after St Catherine, a 4th-century princess and scholar from the Egyptian city of Alexandria who adopted Christianity after witnessing the vision of the Virgin Mary and infant Jesus. Together with the underground caves, the church is one of the top attractions in Bethlehem and stands on the site where Jesus appeared before St Catherine and predicted her martyrdom.

Underneath the church there is a complex of caves which hold several shrines and ancient tombs. Among the buried here are St Paula, her daughter Eustochium, and St Jerome. The latter also spent time in these caves translating the Latin Bible into the vernacular language. The grottoes are connected to the adjacent Church of the Nativity via passageway.

In 2012, St Catherine's Church was declared a UNESCO World Heritage Site as part of the "Birthplace of Jesus: Church of the Nativity and the Pilgrimage Route in Bethlehem". It follows the Roman Rite and is currently administered by the Latin Patriarchate of Jerusalem. Each year on the 24th of December, the church plays host to the Christmas Eve Midnight Mass broadcast live to millions of viewers worldwide.
Image by Antoine Taveneaux on Wikimedia under Creative Commons License.