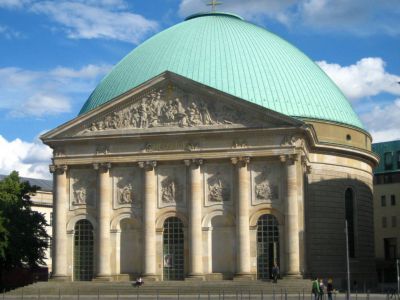 St. Hedwig's Cathedral is a Roman Catholic temple and the seat of the Archbishop of Berlin, located in Bebelplatz. For almost 50 years, this area was part of East Berlin. Large and impressive, the circular cathedral was modeled on Rome's Pantheon, and opened its doors in 1773, being the first Roman Catholic temple in Prussia built after the Protestant Reformation.

By permission of King Frederick II, it served as a place of worship for the numerous Catholic migrants to Berlin, mainly those from Upper Silesia; hence its dedication to the patron of Silesia and Brandenburg, Saint Hedwig of Andechs. During World War II the building was severely damaged, particularly the copper dome, and was carefully restored and re-inaugurated in 1963.

The facade is traditional neoclassical design, while the inner space is all peacefulness and minimalism. It has ample room for seating (hard wooden seats), and features a beautiful oculus, imposing pipe organ, and the altar in the center. The stain glass windows contain geometrical patterns with limited decoration. A walk to the dome is 270+ steps, and is well worth the view.

A combination of nice organ music and a welcoming attitude from local parishioners towards foreign visitors make it a very pleasant place to be and get refreshed for the rest of the day of sightseeing. Highly recommended!

Why You Should Visit:
With a huge dome and oculus, this is an unusually structured Catholic cathedral.
The chapels contain some photogenic sculptures and the abstract geometric stained glass is rather nice.

Tip:
If you visit at 3pm on Wednesday, there is a 30-min organ concert. The sound is majestic and rich, and fills the space with surprisingly little echo.

Opening Hours:
Mon-Wed: 8am-2pm; Thu: 11:30am-5:30pm. The admission is free, but you can always leave a donation.
Image by Beek100 on Wikimedia under Creative Commons License.
Sight description based on wikipedia