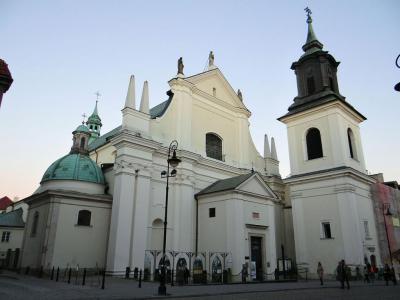 St. Hyacinth’s Church is a popular tourist attraction in Warsaw. This Baroque church was constructed between 1603 and 1639 by Dominicans. The exquisite structure with its pristine white interior was designed by a popular architect Joannes Italus.

The beautiful Chapel of St. Dominic was designed by Tylman Van Gameren, one of the greatest seventeenth century architects in Poland. The chapel adjoins the largest monastery in Warsaw and is one of the few parts of the church that survived the war.

This church enjoyed great prosperity in the eighteenth century. At that time, the richest collection of volumines in Poland was housed in the library at the monastery. It was however completely destroyed later.

Though the interior of the church is completely modern as none of the original furnishings were preserved, its façade is baroque. Some of the prominent tomb monuments you can find here include the tomb of Anna Tarnowska carved in the year 1616 in brown marble depicting the founder in a sleeping pose, the Kararzyna Ossoliska built in 1607 and the black marble epitaph of a rich Polish merchant from Krakow, Regina Sroczyska.

At the Chapel of St. Dominic, you can find the valuable and precious 18th century wooden statue of Ecce Homo. This statue was carved by Antoni Asiski. At the chapel, you can also find the grand altar in black marble, a porta and the exquisite stucco decorations.
Image by Jolanta Dyr on Wikimedia under Creative Commons License.
Sight description based on wikipedia