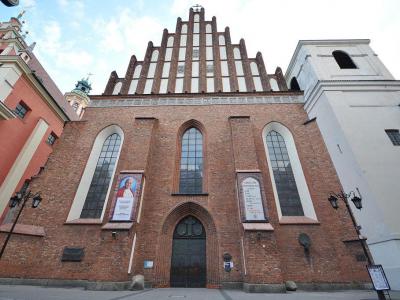 St. John's is one of three cathedrals in Warsaw, but the only one which is also an archcathedral. It is also one of Poland's national pantheons and stands immediately adjacent to Warsaw's Jesuit church. Along with the city, the church has been listed by UNESCO as of cultural significance.

Originally built in the 14th century in Masovian Gothic style, the Cathedral served as a coronation and burial site for numerous Dukes of Masovia. The Archcathedral was connected with the Royal Castle by an elevated 80-meter-long corridor that had been built by Queen Anna Jagiellonka in the late 16th century and extended in the 1620s. The church was rebuilt several times and preserved until World War II as an example of English Gothic Revival. Sadly, it was demolished during the Warsaw Uprising of 1944 but rebuilt after the war.

Why You Should Visit:
Not only is this, by itself, a beautiful building worth seeing, but it is also an important international centre to promote sacred music and its value certainly increases when you attend an organ concert (schedules can be found online).

Tip:
If you visit, make sure that your pictures are taken from the bottom up!
The small crypt can be viewed for a small fee, whereas the rest of the church is free.
Do wander through the tiny streets around the cathedral as they are atmospheric as well.