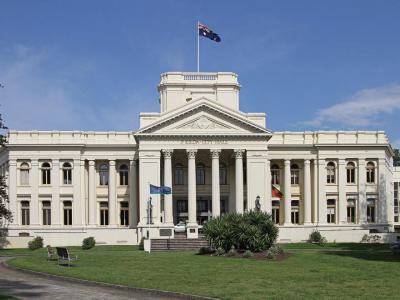 St Kilda Town Hall is a grand, classically styled city hall. The first stage, never completed, was built as the municipal offices and public hall for the former City of St Kilda in 1890. Many additions, internal alterations, and changes in appearance were made in the early and mid 20th century, while serving as the municipal and social heart of St Kilda.

A devastating fire in 1991 seriously affected the art collection and burnt out the hall itself, and was followed by a prize winning refurbishment and further extension. After Council amalgamations in 1994, it became the base for the larger City of Port Phillip, and further extensions and renovations have occurred. The hall within remains popular for numerous social events, meetings and performances, a role it has served for over 120 years.
Image by jjron on Wikimedia under Creative Commons License.
Sight description based on wikipedia