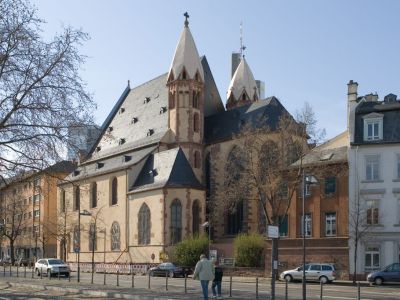 Founded in 1219, this Roman Catholic parish church, located in the heart of Frankfurt, offers an English liturgy to an international congregation. The church has six heavy bells that peal and resonate across the city and one of the best stained glass windows in Hesse.

The St. Leonhard’s church was first dedicated to the Virgin Mary and St. George under a decree by Emperor Freidrich II in 1219. The first building had a Romanesque design and the original portals still remain. In 1323, the parish officials obtained a relic of St. Leonhard and the church adopted St. Leonhard as its patron saint. Between the 1400s and 1500s, gothic style structures were added to the building including the five aisles. The structure served other purposes through the years including as a warehouse for the nearby Book Fair and in the 1700s, as a place to store ammunition. In the 1800s donations by a wealthy parishioner Von Dalberg and purchases made by the then pastor Father Muenzenberger gave the church its ornate altarpieces and sculpted figures that survive till today. In the 1900s the floor of St. Leonhard’s Church was raised to prevent flooding by the River Main.

St. Leonhard’s remains a thriving international catholic parish with a congregation composed of people from over 50 countries coming to mass every week.
Image by Mylius on Wikimedia under Creative Commons License.