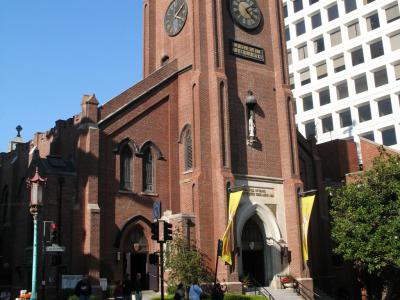 Located on the corner of Grant Avenue and California Street, the Old Cathedral of Saint Mary of the Immaculate Conception has witnessed the progress of the city of San Francisco since its inception in 1854. Built to serve as the Cathedral for the city, this structure was once the tallest building in the city. Commissioned by the new Bishop, Joseph Alemany, the Cathedral was built from the donations given by John Sullivan, an Irish emigrant and the Christian and Jew communities of the area.

The area surrounding the Cathedral faced moral deterioration, with the rise of Chinese gangs and brothels. A sign under the clock face, to this date reminds men of taking the right path in life and not be attracted by evil. Though the Cathedral survived the earthquake of 1906, a fire that followed destroyed the church bells and the altar. The Cathedral was then renovated in 1909 after much debate. The fire had also destroyed the bars and brothels in the neighbourhood and the new settlers of the area took to Christianity. The Cathedral then underwent expansion by building three chapels and a 500 seat auditorium. During the Second World War, the Cathedral acted as a relief point for over 450,000 soldiers, where they could have a meal or celebrate a holiday away from home.
Image by Túrelio on Wikimedia under Creative Commons License.