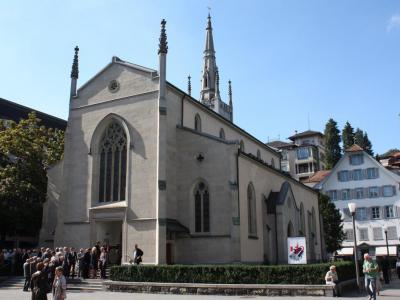 The Matthäuskirche (St. Matthew's Church) is a fascinating piece of Gothic Renaissance architecture and the first Protestant church in Lucerne. Preceding its appearance was active campaigning by German and English holidaymakers, and even the Prussian King Friedrich Wilhelm III himself who donated a precious communion chalice to the planting of the reformed congregation in 1827.

The three-aisled basilica was designed by the well-known Zurich architect Ferdinand Stadler circa 1860, based on an English model. Ultimately, the construction was made possible thanks to the generous financial aid from all over Switzerland, attesting to which are the 22 cantons' coats of arms seen in the side windows.

Owner of the nearby Schweizerhof Hotel presented a suitable plot of land for the project. The foundation stone was laid on January 30, 1860, and the inauguration took place on September 29, 1861.

At the entrance you can see a relief carved in sandstone, commemorating the local reformer and humanist, Oswald Geisshüsler, also known as Myconius (1488-1552). The large glass window in the choir shows the four evangelists with their symbols, namely (left to right): Luke with a bull, Mark with a lion, Matthew with an angel, and John with an eagle. The organ at the back was built in 1971 by the organ manufacturing company J. Neidhart and G. Lhôte.

German composer Richard Wagner, who lived in Lucerne from 1866 to 1872, married his second wife Cosima von Bülow in the Matthäuskirche on August 25, 1870.

The church is open on weekdays from 9 am to 5 pm.
Image Courtesy of Wikimedia and WES1947.