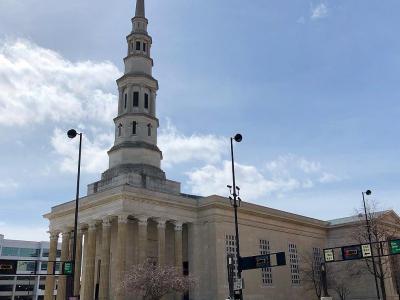 Saint Peter in Chains Cathedral is the cathedral of the Roman Catholic Archdiocese of Cincinnati. It is a Greek Revival structure located at 8th and Plum Streets in downtown Cincinnati. The cornerstone of Saint Peter in Chains was laid on May 20, 1841, under the direction of then-bishop — later archbishop — John Baptist Purcell, and formally dedicated on November 2, 1845. Its striking single spire, which soars 220 feet above street level, was the tallest man-made structure in the city for many decades. The interior of Saint Peter in Chains is distinctly unique among Roman Catholic cathedrals in America, with its Greek-themed mosaics depicting the Stations of the Cross, its ornate Corinthian columns and its massive bronze doors. The cathedral is a popular venue for weddings.

This sight is featured in a self-guided walking tour of Cincinnati, Ohio within the mobile app "GPSmyCity: Walks in 1K+ Cities" which can be downloaded from iTunes App Store or Google Play. Please download the app to your mobile phone or tablet for travel directions for visiting this sight. The app turns your mobile device to a personal tour guide and it works offline, so no data plan is needed when traveling abroad.