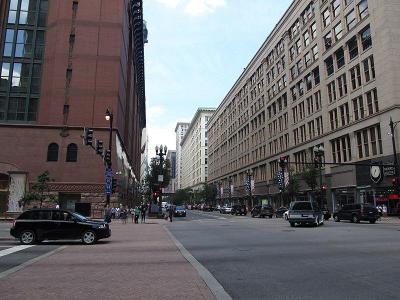 Once an Indian trail running for miles along the eastern boundary of Chicago, this was the last outpost for shopping for thousands of emigrants heading west to the government lands in Nebraska, Kansas and Dakotas. Back in the early 1800s, the trail was unpaved and so deep in mud that it was jokingly said it could suck down a horse and a buggy. Eventually, it took on the name State Road after some state-funded improvements were made, and became a dynamic, economically strong commercial artery of Chicago. In a bid to raise the profile and prestige of the street, in 1870 Palmer House hotel was built.

In the 1900s, the street became Chicago's main shopping destination and even got mentioned in the song "Chicago" as "State Street, that great street." However, the second half of the 20th century saw it eclipsed by Michigan Avenue's Magnificent Mile as a shopping district. Various projects to restore State Street's glory have been met with some success, and now the iconic retail corridor is once again pleasing visitors with a blend of affordable and stylish shopping, enjoying ongoing residential as well as more traditional commercial development. Among the retail anchors here are Macy’s multi-level department store, Block 37, the Sullivan Center Target, and more.
Image by Ken Lund on Wikimedia under Creative Commons License.