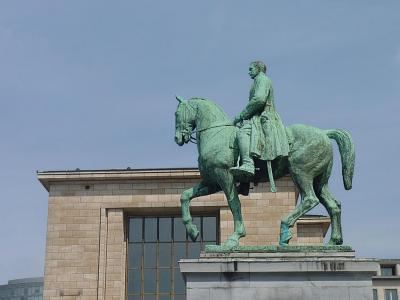 Statue of Albert I, Brussels

This statue depicts King Albert I, who served as the King of the Belgians from 1909 to 1934. It was designed by Alfred Courtens and was inaugurated in 1951. Albert grew up in the Palace of Flanders. Interestingly, he was fourth in line of succession to the Belgian throne, but quickly moved closer as both his cousin and older brother died. By the time Albert was 16, he was second in line, after his father, to take the throne.

Albert took his future task of king very seriously. He was very studious and was particularly concerned about the welfare for the working class of Belgium. He made trips, incognito, to various working class districts to become acquainted with the living conditions of the working class. He also made a trip to the Belgian Congo to gain a better understanding of the situation in the colony. Moved by what he saw, he returned to Belgium and initiated reforms to protect the native populations and to increase progress in the Belgian Congo. King Albert I was also often referred to as a “soldier king”, due to his brave actions on the battlefield. This statue is located at the entrance of the Mont des Arts, which is dedicated to his memory. Fittingly, his statue stands across from one of his wife, Queen Elisabeth I.
Image by Jamain on Wikimedia under Creative Commons License.