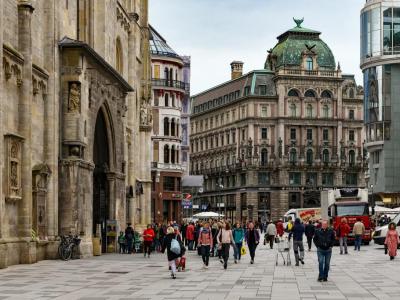 Stephansplatz is a square at the geographical center of Vienna. It is named after its most prominent building – the Stephansdom – Vienna's main cathedral and one of the tallest churches in the world. Before the 20th century, a row of houses separated Stephansplatz from Stock-im-Eisen-Platz, but since their destruction, the name Stephansplatz started to be used for the wider area covering both.

To the west and south, respectively, run the exclusive shopping streets der Graben (literally the "Ditch") and Kärntner Straße ("Kärnten" is the German for Carinthia). Opposite the Stephansdom is the Haas-Haus, a piece of striking modern architecture by Hans Hollein. Although public opinion was originally skeptical about the combination of medieval cathedral and a glass-and-steel building, it is now considered an example of how old and new architecture can mix harmoniously.

Why You Should Visit:
While this might not be the best location for a gourmet meal, sitting in one of the local cafes does provide for world-class people watching in a prime historic location. With the Stephansdom dominating the scene, you can't go wrong.

Tip:
While in Stephansplatz, walk around the side of the Stephansdom to see a miniature thereof. It's quite fun to see it tiny!
Image Courtesy of Flickr and Jorge Franganillo.
Sight description based on Wikipedia.