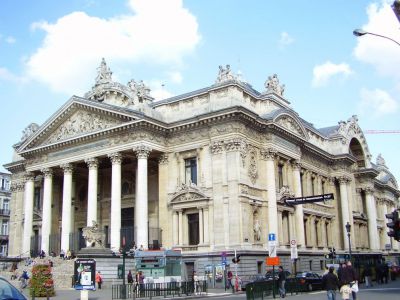 The headquarters of the Brussels Stock Exchange (aka the Bourse) was built over a five-year period, from 1868 to 1873, and sprang from the health and beautification project undertaken in the city center in the late 1800s. The building represents a blend of Neo-Renaissance and Second Empire styles, in which the former, sometimes known as Renaissance Revival, is a broad architectural term applicable to many 19th-century revival styles that are neither Greek nor Gothic. As for the Second Empire style, it reflects elements highly fashionable during the Second French Empire and was widely popular between 1865 and 1880.

The Stock Exchange building boasts detailed ornamentation and houses several sculptures created by famous artists, such as the Jacquet brothers, de Groot, Carrier-Belleuse and Rodin. Its pediment is supported by six columns and adorned with the relief of a female which represents the City of Brussels. Figures on both sides of her symbolize industry and trade. Beneath the pediment are the two winged statues representing good and evil. While the building itself is closed to the public, its exterior is in clear view and sitting on the stairs leading up to the Stock Exchange can provide a good resting spot for those watching or reading.

Why You Should Visit:
Beautiful building that has always been a focal point of this part of Brussels. Still, it is the square outside the building that draws most attention as a venue of various exhibitions, activities and street shows on weekends. Coffee at the square is also a good idea.
Image by Ben2 on Wikimedia under Creative Commons License.
Sight description based on wikipedia