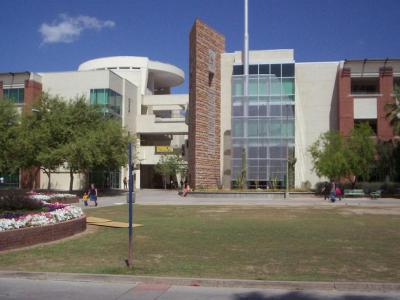 Student Union Memorial Center (U of A), Tucson

The Student Union Memorial Center, on the north side of the Mall east of Old Main, was completely reconstructed between 2000 and 2003. It replaced the old structure originally opened in 1951. The student union has 405,000 square feet (37,600 m2) of space on four levels, and includes 14 restaurants, a grocery market, a two-level bookstore with an office supplies section, 23 meeting rooms, eight lounge areas (including one dedicated to the USS Arizona), a computer lab, a U.S. Post Office, and a copy center.

The building was designed to mirror the USS Arizona (BB-39). A variety of sculptures pepper the premises, decorating the air with the chimes of dog tags or the colors of refracted light in honor of those who have served. A bell housed on the USS Arizona, one of the two bells rescued from the ship after the attack on Pearl Harbor, has a permanent home in the clock tower of the Student Union Memorial Center. The bell arrived on campus in July 1946. The bell is rung seven times on the third Wednesday of every month at 12:07 pm – symbolic of the battleship's sinking on December 7, 1941 – to honor individuals at the UA, as well as after home football victories, over any team except other Arizona schools.
Image Courtesy of Msr69er.
Sight description based on Wikipedia.