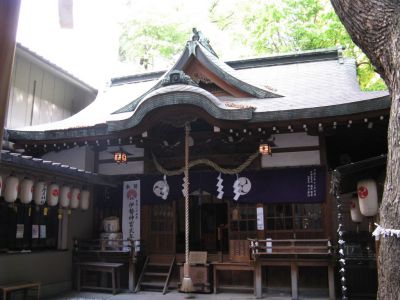 The Sukunahikona Shrine is located in Doshomachi, the pharmaceutical district of Osaka. It is dedicated to the Chinese God of medicine, Shinno and the Japanese God of Medicine, Sukunahikona.

The Sukunahikona Shrine was established in the 9th century. At first a shrine dedicated to Shinno was founded by the pharmacists who resided in Doshomachi. Soon a statue of Sukunahikona no Mikoto was brought here and enshrined from the Tenjin Shrine of Gojo in Kyoto. In1822, an epidemic of cholera swept through the city and the pharmacists made a medication using the bones of tigers. A combination of the medicine, prayer and wearing papier- mache amulets in the shape of Hariko or sacred tiger stopped the spread of the disease.

The Sukunahikona Shrine remains an important shrine where people come to pray for good health. Papier- mache tigers called Hariko are distributed to worshippers especially during its annual Shinno Festival held on the 22nd and 23rd of November. The festival is also called the Tome-no-matsuri or the last festival because it marks the end of all the religious events in Osaka. The major pharmaceutical firms in the area like Takeda, Shionogi, and Dainippon, still contribute to the maintenance of the shrine and it has remained the most important place of worship for pharmacists till date.
Image by KENPEI on Wikimedia under Creative Commons License.