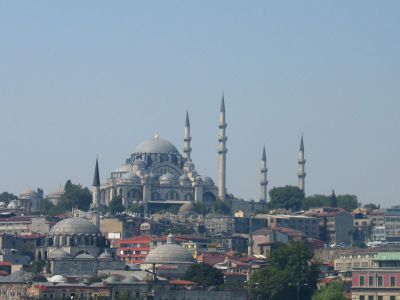 Built for Suleiman “The Magnificent” by the famous imperial architect Mimar Sinan in 1557, the Süleymaniye Mosque is modeled in part on the Hagia Sofia, and in part on a Byzantine basilica, in order to reflect the grandeur of the city’s past architectural monuments.

In 1660, the Süleymaniye Mosque was ravaged by fire and was restored by Mehmet IV. Unfortunately, that restoration work had changed the mosque into a baroque-style structure and ruined the original architecture. The mosque has undergone many restorations ever since. Today it is one of the most popular tourist sites in Istanbul.

The mosque complex consists of a caravanserai, an imaret (public kitchen), a madrassa (Islamic school), a hospital and a hammam (Turkish bath). The public kitchen was constructed to serve food to the poor. The gardens behind the mosque consist of Turbe (tombs) of the great Sultan Suleiman, his wife Roxelana, his mother Dilasub Saliham, his daughter Mihrimah and his sister Asiye. The tombs are fashioned on the Dome of the Rock in Jerusalem. The mosque is distinct from others as it contains the tomb of the great architect Sinan, designed by the occupant himself.

Why You Should Visit:
Great picturesque neighborhood, fewer tourists, sensational views of the city and quite a peaceful and solemn overall experience.

Tip:
To really enjoy the views, go down and find some restaurants on the rooftops of the buildings close to the mosque.
If you have trouble walking up and down, consider renting a (reliable) taxi cab or plan your ascent/descent accordingly.