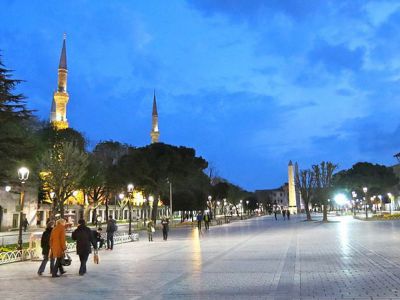 The former Hippodrome of Constantinople, a circus arena where chariot races and other sporting events once marked the heyday of the Byzantine Empire, today got a new life in the form of Sultanahmet Meydanı (Sultan Ahmet Square) in the heart of modern-day Istanbul. Here, alongside a few surviving fragments of the ancient Hippodrome, you will find all the famous landmarks of the city, including the Blue Mosque, Hagia Sophia, Topkapi Palace Museum, Sultan Ahmed Mosque, Suleymaniye Mosque, Serpents column, the Museum of Turkish & Islamic Arts and many others. The Basilica Cistern is a mere 40m walk from the square and the Grand Bazaar is within a walking distance, too.

The square is very large and has lots of benches scattered around which is quite convenient for taking a break after long hours of sightseeing and/or for grabbing a quick bite from one of the food carts abound in the area selling a variety of breads, roasted corn and chestnuts, simit (Turkish pretzel) with or without chocolate cream, and plenty more. Along the tram line on both sides there are shops, restaurants and cafes offering generous selections of teas, coffee, Turkish Delights and gift packs.

As a gathering place, Sultanahmet is continuously bustling with tourists and locals alike, families enjoying the colorful artezian fountain, children running along the greenery between alleys, and the elderly folk basking in the brightness of life all around them. The square is also home to a large number of street cats and dogs who seem to be rather friendly and keep to themselves. The place is open to the elements and provides very little cover, so carrying an umbrella or raincoat, if rain is predicted, is highly recommended.
Image by Erik Cleves Kristensen on Wikimedia under Creative Commons License.