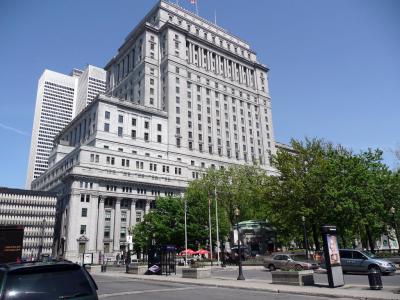 This 24-story office building was an imposing figure when it was completed in 1931, and it continues to stand its ground as one of the most impressive sights on the Montréal skyline. Presiding over the east side of Dorchester Square, its architectural presence is rivaled only by the Dominion Square Building at the north end. If you are around at 5pm, you can still hear the chime music when sitting outside near the park; not only that, but the beautiful lobby is publicly accessible and definitely worth a look.

Here's for some interesting historic background: During WWII, Britain's gold reserves and negotiable foreign securities were secretly packed in crates labelled 'Fish' and shipped across the Atlantic Ocean to Canada. Upon finally reaching Halifax, on 1 July 1940, the British treasure was transferred to trains and the gold sent to Ottawa while the securities were shipped to the Sun Life Building and locked in an underground vault three stories beneath, which was guarded around the clock by police. The extremely secretive United Kingdom Security Deposit, operating in the specially constructed vault, arranged for the sale of Britain's negotiable securities on the New York Stock Exchange over the next few years to pay for Britain's war expenses. The 5,000 employees of Sun Life never suspected what was stored in their basement, and while unloading the treasure ships, not one crate of the cargo went missing. Even though thousands of people were involved, Axis intelligence agencies never found out about 'Operation Fish'.
Image by Reading Tom on Flickr under Creative Commons License.