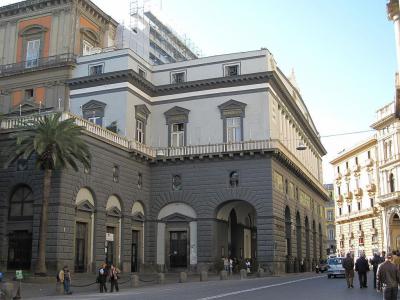 The San Carlo Theatre is the main opera house of the city of Naples. It has been the venue of major productions by well known composers throughout its history.

The San Carlo Theatre was commissioned by the Bourbon King Charles VII of Naples and designed by the architect, Antonio Medrano. The building had a neoclassical style with gilded interiors and blue upholstered seats. The theater opened in 1737 with the performance of Domenico Sarro's, ‘Achille in Sciro’, based on a play by the poet and playwright, Metastasio. The original structure was damaged by a fire in 1816 and rebuilt within ten months by the architect, Antonio Niccolini under the orders of another Bourbon monarch, King Ferdinand IV.

The San Carlo Theatre remains the oldest continuously active opera house in Europe. The theater’s museum has exhibits tracing the history of the building and the many great productions that it has hosted. It can seat an audience of 1,470 and its acoustics are regarded as one of the best among opera houses in Italy. It has hosted productions of internationally famous composers like Giuseppe Verdi, Donizetti and Rossini. A guided tour is available in English that takes visitors around the theater and backstage.
Image Courtesy of Wikimedia and Armando Mancini.