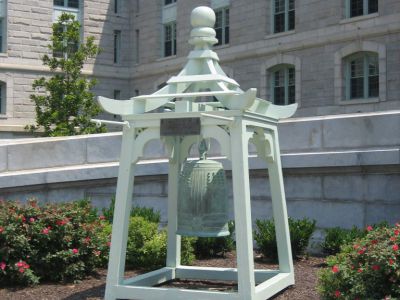 Installed in a specially constructed belfry, to the left of Bancroft's Hall entrance to the U.S. Naval Academy in Annapolis, is a large bronze replica of the Temple Bell that United States Commodore, Matthew Perry, brought back from Japan following his mission there in 1855. This bell was among the items “given” to Commodore Perry, upon his explicit request, by the Regent of the Ryukyu Kingdom during the fourth and final exchange of gifts between the U.S. and the Kingdom on 11 July 1854. Attesting to this is a commemorative plaque with the inscription "Replica of the Temple Bell presented in 1854 to Commodore M. C. Perry, USN by the Regent of the Lew Chew Islands (Okinawa)".

Otherwise known as the Gokoku-ji, the original bell, cast in 1456, for many years remained at the Academy, presented here in 1859, by the Commodore’s wife, after his death, according to his wish. The inscriptions on this bell read: “Daiku Emon-no-jo Fujiwara Kunimitsu” (The [Japanese] Imperial Official Master Metalworker, Fujiwara Kunimitsu); “Keitai shichi-sai” (the seventh year of the Ming dynasty Ching t’ai period [1456]), along with a lengthy votive epitaph. In translation it says in part: “May the sound of this bell shatter illusory dreams, perfect the souls of mankind, and enable the King and his subjects to live so virtuously that barbarians will find no occasion to invade the kingdom.”

Both, the original bell and its replica have played a role in the U.S. Naval Academy traditions, ringing to celebrate each time the Navy defeated the US Army in an annual football game between the teams of USMA and USNA.

On 22 July 1987 the original Gokoku-ji bell was returned to Okinawa, Japan, courtesy of retired Marine Maj. Gen. James L. Day, who successfully led the return negotiations. It is now displayed in the Okinawa Prefectural Museum at Naha.
Image by Brian D. Bell on Wikimedia under Creative Commons License.