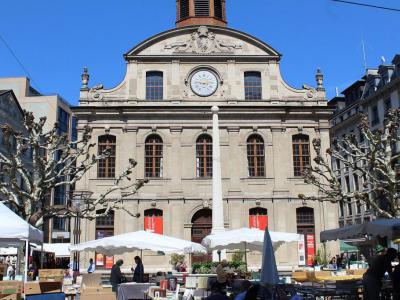 Located in the eponymous square at the heart of the Old Town of Geneva, the Temple de la Fusterie is a Reformed church that is distinguished from other local churches as the first religious site in the city specifically built for Calvinist worship. It was designed by architect Jean Vennes, taking two years to build – from 1713, and was consecrated on December 15, 1715.

Amid the inflow of oppressed Huguenot refugees from France to Geneva, the church imitated – in terms of both, architectural style and spatial planning – the Huguenot temple in the Paris suburb of Charenton-le-Pont that was designed by influential French architect Salomon de Bross in 1623 and destroyed in 1686.

The temple boasts late Baroque style, with a big clock at the top of the main façade. Contrary to the latter, the interior is rather modest, with a dormant and encircling gallery of Tuscan order colonnades and another colonnade set above the gallery, supporting the ceiling, which is flat, thus creating a basket arch vault above the main room of the nave.

Initially, the temple did not have an organ, which appeared only in the middle of the 18th century. The visual centerpiece of the church is the organ loft of the detached pulpit. Known for its excellent acoustics, the church serves as a concert hall these days. The musical performances last about 15 minutes.
Image Courtesy of Wikimedia and Chabe01.