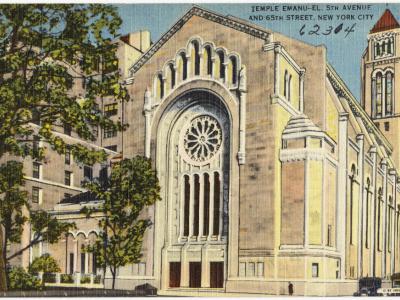 One of the most beautiful synagogues in the world, the Temple Emanu-El is also one of the largest Jewish houses of worship. It sits on the Upper East Side of Manhattan, NYC and serves the large local Jewish community.

At first, shortly after the Civil War, the Emanu-El congregation, consisting of German Jews, worshiped in a temple north of 42nd Street in Lower Manhattan. That temple eventually proved too small for the growing congregation, plus the location was unsuitable because of the commercial activity in the street that made it difficult to focus on prayers. It was therefore decided to relocate to a custom-built spacious synagogue in a tranquil place that would meet the needs of the worshipers.

The new Temple Emanu-el was built just off Central Park in 1927-1929, shortly before the stock market crashed. The spectacular limestone building featuring Medieval style with Romanesque details resembles a European cathedral and can easily be mistaken for one due to the presence of stained-glass windows, except the imagery there is Jewish. The wheel-like window on the facade is a traditional Magen David – the six-pointed Star of David. Inside the temple there is a large (100 feet wide, 175 feet long, and 103 feet high) sanctuary capable of seating up to 2,500 people. The sanctuary has more than 60 stained glass windows and a beautiful glass and marble mosaic arch that frames the bimah.

This stunning temple is well worth a visit if you're in the area, and is open to the public free of charge from 10 am to 4:30 pm Sunday through Thursday (except on Jewish holidays) for self-guided tours of the sanctuary.

Tip:
If you go to the side entrance (1 East 65th), get yourself buzzed in and tell them you want to tour the sanctuary. Since it's self-guided, it might be a good idea to download a self-guide brochure from their website. You may also wish to take an elevator to the small museum upstairs that features a permanent and rotating exhibits of Judaica – historical objects from the 14th-20th centuries, as well as art installations relating to Judaism.
Image by Boston Public Library on Flickr under Creative Commons License.
Sight description based on wikipedia