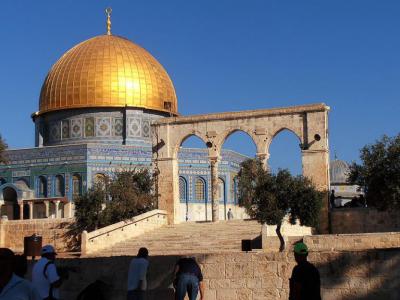 The Temple Mount is one of the sacred most spots in Jerusalem and, perhaps, the entire world. From a topographical standpoint, it represents an elevated plateau located in the oldest part of the city, while politically, this piece of land is governed by the Supreme Muslim Religious Council.

Subject to claim by three major religions (Judaism, Christianity and Islam), this holy place is known in Hebrew as Har haBáyit (“Noble Sanctuary”) and in Arabic as Haram esh-Sharif. For Christians and Jews, the Temple Mount is sacred primarily for its association with the Temple of Jerusalem that once stood here. In the apocalyptic texts of the Bible, it is also said that Jesus will descend upon the Earth here once again to start the Kingdom of God. The Muslims, in turn, consider this place important because, according to the Qur’an, Prophet Muhammad ascended from here to Heaven.

This sacred ground has also been the mythical location of the binding of Isaac, where the presence of Yahweh came to rest, and even the place where, according to the Bible, Adam was created from the proverbial dust of the ground. It might therefore be a good idea for those visiting the Temple Mount to study the myths associated with it beforehand, so as to appreciate the importance of this place in its entirety.

Tip:
It is probably best to have an experienced guide take you around the Temple Mount, so as to ensure coming at the right hours, getting access, etc.
You can access through the wooden bridge on the Western Wall plaza. There is a strict security check at the entrance, so don't forget your passport.
Whatever you do, try and come early while the others are still asleep, as this is one of those places worth visiting in a completely serene and relaxed atmosphere.
Image by ekeidar on Wikimedia under Creative Commons License.