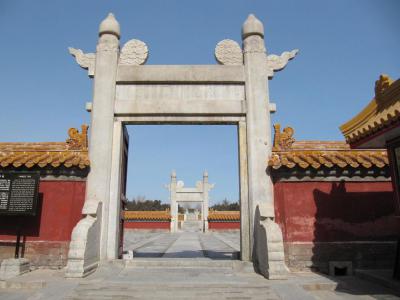 Just outside the second ring road in Beijing, around the Andingmen area, you can find the Temple of Earth. This temple is spread over 42.7 acres and is close to the famous Yonghe Temple.

Temple of Earth was built by Emperor Jia Jing of the Ming Dynasty in 1530. Here, annual ritual of offering to the heaven was held during summer solstice and was attended by Qing and Ming dynasty emperors.

As you enter the temple premises, you will find charming tree lined paths and lush gardens. It was restored and renovated over a period of time after being damaged during the Cultural Revolution. The temple is square in shape because it symbolizes the Earth. It is located to the north of Beijing because Chinese believe that north is the direction of Earth.

Circular shaped Temple of Heaven is located to the South of Beijing. This temple symbolizes sky and heaven. To the East and West lie the temples of Sun and Moon respectively. These four temples are believed to interact in a spiritual manner. Temple of Earth has been listed by the Chinese government among the most important monuments to be preserved.
Image by Ivan Walsh on Wikimedia under Creative Commons License.

Beijing’s places of worship are some of the best links to the city's history. The unique churches, Buddhist and Taoist Temples, and beautiful Muslim Mosques all tell great tales of the history of Beijing. Despite that many of them have been partially or completely destroyed over the years either by wars or by the changes of political power, some still remain. You can visit a few beautiful...  view more