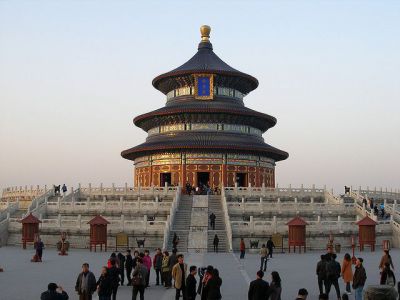 Temple of Heaven, Beijing (must see)

The Temple of Heaven is located in central Beijing’s southeastern part. This complex consists of Taoist buildings and was constructed during Yongle Emperor’s reign between 1406 and 1420 especially for the Emperors to offer prayers. Though the practice of Chinese Worship of heaven by the emperors was existent much before Taoism, this temple is considered to be a Taoist temple.

In the sixteenth century, the Jiajing Emperor named it the Temple of Heaven. He also constructed the Temple of Earth, Sun and Moon.

Anglo-French Alliance occupied the Temple of Heaven during the Second Opium War. In 1900, this temple complex was used as the temporary command by the Eight-Nation Alliance forces during the Boxing rebellion.

During this period, the temple and its garden were seriously damaged and artifacts were stolen. The complex further fell to ruins with Qing dynasty downfall. It again came into prominence when the Republic of China President Yuan Shikai held a prayer ceremony here in 1914 in his bid to become the Emperor of China. The Temple of Heaven was first opened to the public in 1918.

Today, this temple is a popular spot where people come for Tai Chi and other activities. Its impressive architecture and landscape design attract many tourists from around the world.

Why You Should Visit:
Spectacular scenic views and famous landmark & historic site in Beijing as well as China.
It is always very interesting to see how domestic people enjoy time at weekends.

Tip:
Having a guide will help with understanding what you're looking as history is what this place is mostly about.
If you'd rather avoid huge crowds of tourists, try going in the late morning or early afternoon.
As for the admission, consider purchasing the full ticket because if you are to do them individually, you will pay much more.