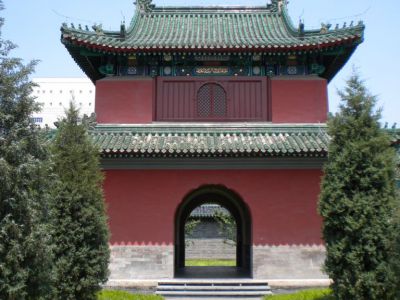 Emperors of the Ming and Qing Dynasties used to worship the constellation deities, especially the God of Moon on Autumn Equinox Day at the royal Temple of Moon. It was in 1955 that this temple was opened to the public as a leisure park.

Temple of Moon park is divided into two namely the south and north parks. At the north park, you can find several red brick ancient buildings with green roofs. Southern part of the park features rockeries, water, winding paths and lakes.

Moon altar is situated at the north park where you can also find other buildings such as Bell Tower, four halls, west and north gates and the four-quadrilateral pavilion. South Park is popular for its abundant natural beauty that includes bowery roads, artificial mountains and plenty of water.

This park is famous for the bonsai exhibition held throughout the year. You will find the Moon Goddess Chang’e sculpture at the pool where a waterfall drops. Beijing Children’s Hospital is located 250 meters from Nanlishi Road. This road is located to the south of the Temple of Moon.

Other popular attractions close to the Temple of Moon include the Baita Temple, Tianwang Hall, Dajue Hall, Qifo Hall, White Pagoda, Temple of Past Emperors and Guangii Temple.
Image by Dirrival on Wikimedia under Creative Commons License.