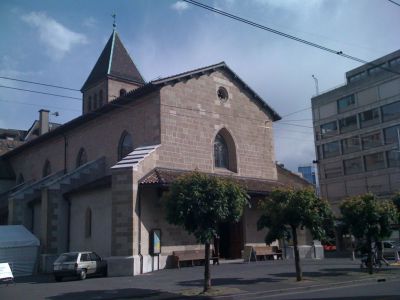 The Temple of Saint-Gervais is a Protestant church in the eponymous quarter of Geneva. The first temple on the site was built in the 4th century and was replaced with a Romanesque church in the 10th century. The latter had profoundly changed its appearance over time, particularly after a fire in 1345. It was completely rebuilt from 1436, upon which it was dedicated to Saint Gervais, thus giving its name to the surrounding district. In the 17th century, the church underwent further major modifications, attaining a Gothic style, funded with donations from local watchmakers, jewelers and goldsmiths residing in the area.

During the establishment of the Protestant Reformation, the building was dedicated to Protestant worship. At that point it was transformed with an installation of a pulpit in the nave and galleries along the north side; these will be destroyed in 1903, all except one which will be transformed into a sacristy. In 1901, a major restoration of the building saw, among other features, the addition of several stained glass windows, including that of Henri Demole on the eastern theme of Escalade.

Under the temple there is an archaeological site which is also classified and includes the remains of the Gallo-Roman building and the early Christian church. Excavations were carried out in two stages, from 1987 to 1994, and then from 2000 to 2005, over an area of nearly 2,000 square meters. The ensemble is open to the public and can be visited as part of an archaeological walk.

The building is currently listed as a Swiss cultural property of national importance and is frequently used as a concert hall.
Image Courtesy of Wikimedia and Moumou82.
Sight description based on Wikipedia.