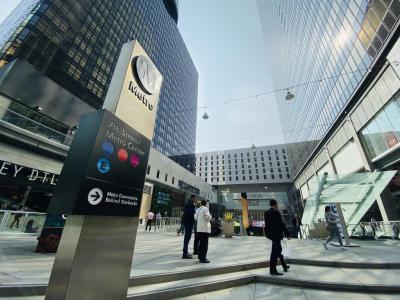 The Bloc (stylized as THE BLOC), formerly Macy's Plaza and Broadway Plaza, is a nice, clean, modern place with great access to the metro and a thoughtfully curated selection of good restaurants and stores from all price points. Most of all, the outdoor shopping experience is convenient and constantly crowded with residents – people on their meal and coffee breaks, local Angelenos, and visitors from all over the world.

The original Broadway Plaza opened as an enclosed shopping mall in 1973, claiming to be the first enclosed "suburban" type shopping center in a downtown area in the United States. The original enclosed mall included the downtown The Broadway store, the Hyatt Regency Los Angeles, and an Oshman's Sporting Goods, along with an underground food court and several smaller non-chain shops.

After the major renovation in 2015, it has been a center of downtown economy and a pioneer of downtown revival, with tenants including Macy's, LA Fitness, Nordstrom Local, Paper Sources, UNIQLO, and the Sheraton Grand Los Angeles hotel, among others. The new plaza also contains Los Angeles' first Alamo Drafthouse Cinema, an Austin-based movie theatre chain, and Starbucks Evenings, a Starbucks store concept that serves alcohol. Other restaurants include Hatch, Urban Oven, CoffeeWalk YogurTalk, Everytable and District DTLA.

Owners have been working on making The Bloc more social-media friendly, so you're encouraged to stop by and bring your selfie loving cameras, or check the website for concerts/movie screening of interest. The outside seating area is particularly nice and photo worthy, similar to New York's Meatpacking District, with a Cali touch.
Image Courtesy of Flickr and Sharon Hahn Darlin.