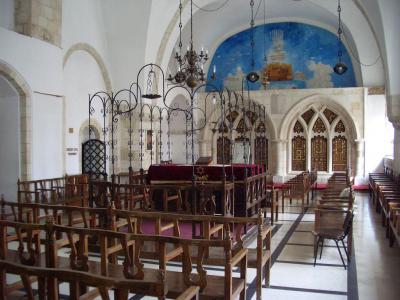 This delightful complex of small interlinking synagogues, built by the first Sephardic community settled in Jerusalem in the late 13th century and recently restored to its splendor with furniture and articulate designs collected from similar synagogues in Sephardic countries, is a beautiful testament to times that were.

As the Sephardic community grew, new synagogues were built according to the Ottoman Empire's requirement that "no infidel prayer house could stand higher than a neighboring Moslem holy place" – this stipulation was circumvented by having the ground floor below street level. Later on, during Israel's War of Independence, the Jews of the Old City's Jewish Quarter sought refuge in these synagogues.

When the Old City fell into the hands of the Jordanian Legion, the synagogues were destroyed; thereafter, the Jordanians used the area for livestock stalls. In the aftermath of the Six-Day War (1967), Jewish organizations around the world and the Israeli government worked together to meticulously restore the synagogues to their former status and appearance. Pictures of the synagogue before and after the war are displayed.

If you're interested in synagogues and/or Sephardic Judaism, this is a must-see. The history here and the lack of tourist traffic make it a beautifully peaceful, special place on the edge of the Jewish Quarter.