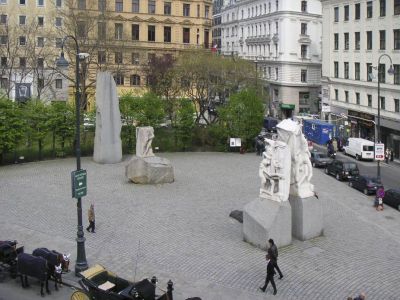 The Monument Against War and Fascism, Vienna (must see)

The split Monument Against War and Fascism is actually made up of four statues, each symbolic and thought-provoking in their own right. Designed by Alfred Hrdlicka in 1988, they represent the many individuals exterminated during World War II by the German Nazis.

The pieces are all created from granite. Ironically perhaps, the granite was taken from a location that is part of what used to be the Mauthausen Concentration Camp. The location of the monument sits atop the old Philipphof House. This home was destroyed during a bomb run in March 1945. Sadly, three hundred individuals were killed during that attack. You will also be able to find a stone reproduction of Austria's Declaration of Independence affixed in the Stone of the Republic.

In the scenes depicted here, you can find the so-called “Gates of Violence” that commemorate all people that have lost their lives during the war. Images of knives, clubs, and gas masks that were so commonplace during the first World War, along with chained slave laborers from the Mauthausen Camp, are all depicted. A mother is caught in childbirth, essentially giving birth to a soon-to-be soldier.

The location has been quite controversial with the local community; however, it is still worth the visit, for what it reminds one about that terrible time in history.
Image by Priwo on Wikimedia under Creative Commons License.

Josefstadt is the smallest district in Vienna. Most mayors of Vienna have lived here,...  view more