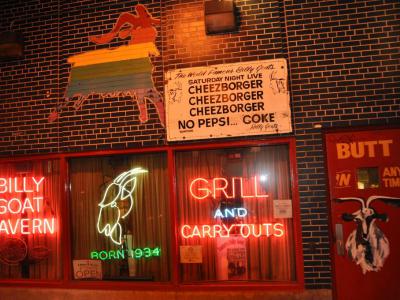 Located across from the United Center, now the home of the Chicago Bulls and the Blackhawks, the Billy Goat Tavern originally became famous as a rowdy and popular sports bar. The owner came to adopt a lost goat and so it gained its name. Baseball fans know the story of the "Curse of the Cubs", which originated here because the goat was not allowed in Wrigley Field during the 1945 World Series. The tavern's other claim to fame is its tie with the Saturday Night Live "cheezborger" skit where they were mocking the stereotype of Chicagoans.

Served on a kaiser roll (a welcome change!), the burger is handed on a tissue paper and you may add your own condiments: lettuce, onion, pickles, ketchup and mustard are available. There are other options, too, such as breakfast and a good booze selection (flowing from the beer taps is a special Berghoff brew), but this place is more about the experience in a true Chicago old-school pub.... and watching a Chicago game and/or reading the old (1930s) newspaper clippings on the walls while you're at it. The interior is really quite cool and definitely Instagram-worthy for those coming from afar.

Note:
Tourists, don't be afraid of this place, nor fear its location under the main avenue. It may be dingy and divey, but that's part of the allure! A big sign will tell you to "enter at your own risk". Worry not! Expect to be yelled at a little but it is all in fun and part of Chicago's personality.