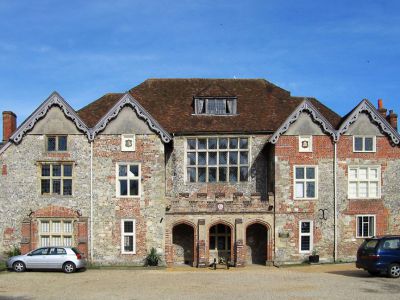 The Rifles Berkshire and Wiltshire Museum is housed in a listed building called "The Wardrobe." The original building was erected in 1254. It was rebuilt in the 15th century. It was used primarily to store the robes and sacerdotals of the Bishop of Salisbury. Museum trustees acquired the Wardrobe from the cathedral Dean in 1981.

The building has a symmetrical east facade. It has two stories and an attic. It is made from flint and stone rubble with a tile roof. The center has a large casement window between the wings. A triple Tudor arched arcade frames the entrance. Since James I and Queen Ann were guests here, the Wardrobe has been called "the King's House."

The museum is within the Cathedral Close. It holds collections of military artifacts from the Royal Berkshire regiment and the Wiltshire Regiment. The museum was opened by the Duke of Edinburgh in July of 1982. It was given the nickname of "Redcoats in the Wardrobe." The museum presently has 34,000 articles, of which 1,200 are on display.

There are 16,000 photos, 6,000 documents, and 4,000 medals. The artifacts are swords, rifles, pistols, ant-tank weapons, flags and battlefield souvenirs, including one cannon ball from the American Revolution. Four rooms use a timeline approach from the late 18th century to Afghanistan.

The museum is open from February to December, Monday through Saturday, 10 am to 5 pm.
Image Courtesy of Wikimedia and Andrew Dunn.