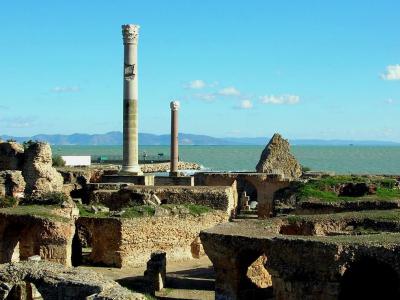 The Baths of Antoninus, aka the Baths of Carthage, are the largest set of Roman thermae built on the African continent and one of three largest built in the Roman Empire. They are also the largest outside mainland Italy and the only remaining Thermae of Carthage dating back to the Roman era, precisely between 145 and 162 AD (built during the reign of the Roman Emperor Antoninus Pius).

The name is somewhat misleading as to the construction's origin; the dedicatory inscription notes that the Baths were built "with the permission" of the emperor, rather than by him directly.

Because of the ferocious predation that raged upon the site, to date, only a large part of the basement and a few vestiges of the ground floor have survived. Indeed, for centuries, this site had served as a stone quarry, used to provide construction material for Tunis and other cities throughout northern Mediterranean, and was seen largely as nothing more than “a colossus demolished and stripped of almost all its architectural and ornamental elements”. Its proximity to the shore only made things worse.

The complex was identified at the early 19th century and classified as a historic monument in 1901. The excavations carried out since the end of World War Two have resulted in the creation of an archaeological park. The glorious ruins of the Baths basement were excavated, for the first time, in 1944.

Following the UNESCO international campaign, the Antonine Baths were included in the World Heritage List in 1979, and then made into the national park of Carthage and Sidi Bou Saïd.

Why You Should Visit:
One of the most important landmarks of Tunisia.
The magnificent ruins, extending for over 300+ meters, provide an idea of the magnificence of this place in its heyday, when the missing vaults rose to a height of more than 29 meters, approximately an eight-storey building.

Tip:
If you have some knowledge of Carthage, then visiting independently would be fine; but if you don't, consider getting a tour as there isn't much information around the ruins.
Image Courtesy of Wikimedia and Bernard Gagnon.
Sight description based on Wikipedia.