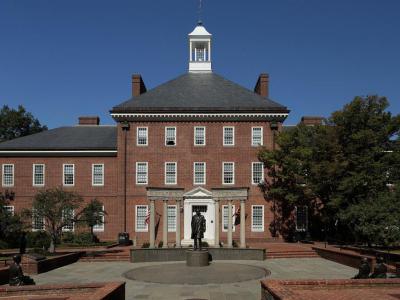 Standing proud outside the State House in Annapolis, the Thurgood Marshall Memorial was dedicated on October 22, 1996. The memorial commemorates the Baltimore-born, first African-American U.S. Supreme Court Justice, Thurgood Marshall, who served for 24 years and was one of the past century's foremost leaders in the struggle for equal rights under the law. Thurgood Marshall became famous in 1954 by bringing before the U.S. Supreme Court the case of Brown v. Board of Education of Topeka, which put an end to racial segregation in American public schools.

Following Marshall's death in 1993, the state of Maryland decided to honor his legacy. On May 17, 1994, exactly 40 years after the Supreme Court's Brown v. The Board of Education of Topeka decision, the governor of Maryland signed an Executive Order establishing the Thurgood Marshall Memorial Statue Commission. After a nationwide competition, the Commission awarded the memorial design to Maryland native artist Toby Mendez.

The winning design features an 8' statue of Thurgood Marshall as a young lawyer. Behind him are pillars with the inscription "Equal Justice Under Law", and facing him are two benches. On one of the benches is the figure of Donald Gaines Murray, whose entrance into the Law School of the University of Maryland marked Thurgood Marshall's first important victory in his struggle for school integration. On the other bench are the figures of two children representing Marshall's most important achievement, Brown v. The Board of Education of Topeka et. al. Within the circle of the plaza is a chronology of the important events in Thurgood Marshall's long and distinguished career.

The actual place of the memorial, on Lawyers' Mall, also known as State House Square, is particularly important, as it marks almost the exact spot where the Maryland Court of Appeals stood in the mid-1930s. In 1935, Marshall represented Donald Gaines Murray in a trial at that very court and won him and other black students the right to attend the University of Maryland School of Law. Many of the arguments Marshall used in winning that case were later used by him in Brown v. the Board of Education and other integration cases.
Image Courtesy of Wikimedia and Martin Falbisoner.