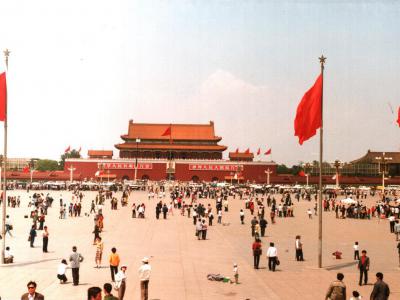 The name Tiananmen Square is the heart of Beijing. Tourists flock from all over China and around the world to this square that features the Tiananmen tower, Mao Zedong Memorial Hall, the Monument to the People’s Heroes and the Great Hall of the People.

Functionally this square was Forbidden City’s front door. Constructed during the Ming Dynasty in 1417, the square was used to inform people whenever a change of ruling power occurred. The tower located to the north of the square was accessible only to aristocrats and the royal family and was not open to the public until 1911 when feudal rule came to an end. The Monument of People’s Heroes, constructed in 1952 is the largest in China. This granite monument is located at the center of the square.

The Great Hall of the People is located to the west of the square. Constructed in 1959, this hall is an impressive site where prominent diplomatic activities and political meetings are held. To the south of the square, you can find the Memorial Hall of Chairman Mao. Chairman Mao’s body is kept here in a crystal coffin and decorated with flowers. The National Museum of China is located to the square’s eastern side. This museum showcases the country’s rich history.

Why You Should Visit:
A must-see place for its historical and political significance, but also a great place to meet and interact with people from China. It is quite a sight in the evening, completely lit up, with lots of people around.

Tip:
To be allowed access to the Tiananmen Square you must go through a series of security checks and you must have your passport. This goes for a visit to the Forbidden City as well since the south entrance is facing the square.
Image by Derzsi Elekes Andor on Wikimedia under Creative Commons License.